Roughly two years ago I came across a fascinating web site created by Ken Cupery which detailed the rich history of working boats made from paper. I had been interested in boat building for many years, but had never considered paper as a building material before this. After running across Mr. Cupery's website, I began to look upon several unused rolls of paper at my worksite in an entirely new light.
I am a teacher at an Outdoor Education school, where we don't typically rely on bulletin boards like most classrooms have, as we are outside with kids most of the time. Yet many years ago an elementary school donated to us several rolls of 'bulletin board' paper thinking we could put them to use somehow. I had seen these rolls of paper moved from one storage area to another several times, yet remaining largely untouched over six years. I decided they would be put to a higher purpose than dust collection.
About January of 2009 I decided my canoe, a very old Mad River Courier (14'7" long and 32" wide), needed to have its wooden gunnels removed, sanded, and re-oiled. With its outer whales off, I reasoned it would make a perfect mold to start layering with paper. And so it began. . .
The paper being supplied, I began to look for the other materials I would need. I had on hand the better part of a gallon of spar urethane leftover from a project, and at work I was able to find two partly filled gallon cans of polyurethane which were scheduled for disposal. This seemed to be a decent amount of sticky stuff that might render paper strips fairly water resistant.
It occurred to me I might be able make the entire hull out of spare parts or recycled materials. It became a challenge to use only materials that were scheduled to be thrown away or that were lying around with no designated purpse. I did not want to spend any money on construction. 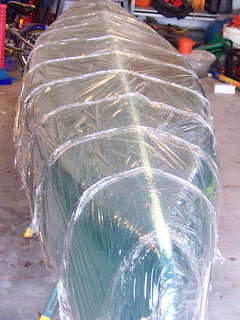 With this in mind, I raided the office supply closet for 3 boxes of 2" binder clips and the kitchen supply closet for a roll of plastic wrap. This was a good start.
I rested the canoe on four sawhorses placed so their tops ran parallel with the keel line and would make contact with the interior of the hull. This allowed me to clamp the strips of paper to the inwhale over the entire length. I took a roll of paper which was roughly three feet long and band-sawed it into several rolls which were 4 to 6 inches wide. I wasn't sure how to saturate the paper with the spar urethane, so I started the first strips clamped in place dry, and would use a paint brush to 'wet them out' after they were in place. 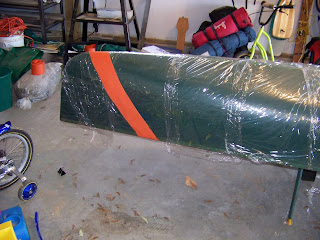 It was easy to clamp a layer into place, brush on a lot of sticky stuff, and then clamp another layer at roughly a ninety degree angle to previous layer. At least it was across the middle of the hull. When I got to the stem areas, things got a little trickier. It was really difficult to fold four inch strips of paper across a nearly vertical stem, have them lay flat, and clamp them in place. I started tearing one inch wide strips to go across the stems, but it was still tough to get them to stay in place long enough for the urethane to dry. I experimented with letting the urethane get tacky before placing the strips, but never really came across an effective, easy solution.
UNIVERSAL LAW DEBUNKED! Duct Tape is NOT the solution to all structural/constuction problems! When the ends weren't covered sufficiently, I applied several strips of duct tape around and over the stems. The good news is it was strong and stuck in place. The bad news is it wrinkled over time, possibly due to paper shrinkage, and left incredibly uneven wrinkles all over both ends of the boat. I'd have to deal with it later.
UNIVERSAL LAW CONFIRMED! You will never have enough sticky stuff when you actually need it (without a lot of planning)! After about 7 layers of paper, I had exhausted my supply of spar urethane and polyurethane. Here is where I had to compromise my values a bit. . . I actually spent money.
However, I still kept with the "recycled" theme and went shopping at our neighborhood ReStore. This is a "Habitat for Humanity" project where anyone can donate building supplies, and then customers can buy them at a greatly reduced price. The proceeds go to support Habitat's mission. So for six dollars I found a previously opened gallon can of "exterior varnish" - that was the actualy title on the label, and the can looked to be decades old, but the contents where fine. 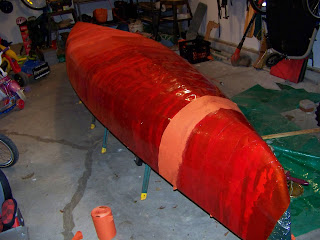 Three dozen binder clips were not enough, so I found an old length of 4 inch PVC pipe, ran a cut down its length on a table saw, then chopped it into half inch or three quarter inch wide circles. These made perfect clamps for holding paper strips onto the inwhale.

In the picture to the left you can see the difference between a strip of dry paper, and the layer which was already wetted out. In this particular case I was covering a gap that was left from the previous layer.
UNIVERSAL LAW CONFIRMED! Ignoring problems early on, hoping they'll just get better on their own later, seldom pans out. I had been skimping a bit on the varnish or poly as I was brushing it on, and after drying I could see voids, distinct air pockets between layers. There were also many, many raised wrinkles and seperated edges. With each layer I would blindly hope that the next layer would help to 'smooth things out', but in reality once a wrinkle was there, it just seemed to be compounded and made for more air pockets in later layers.
If I were a salesman, I'd describe these as 'hull integrated micro bouyancy chambers'. But I know they will likely be hundreds of little sponges as time goes by, and this is where the paper will degrade first. Oh well.
Posted by mark at 6:41 AM