Here you can see a close up of a few paper layers after they've been wetted with the varnish. 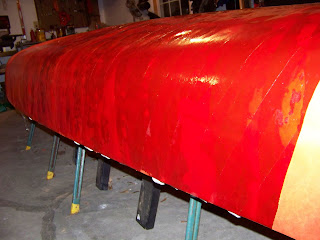 Looking closely, you can see some of the clamps I used to hold the paper to the inwhale while the varnish dried. The PVC clamps were great for this, but wouldn't be wide enough to hold the gunnels in place while glueing.
After about 40 hours of labor, 11 layers of paper, and one 3 x 8 section of fiberglass screen meant for a screen door, I ran out of varnish. (The fiberglass screen was stuck across the bottom of the canoe between layers 4 and 5 of paper.) Once the varnish was dry, I smeared on a layer of latex primer. This was probably a mistake, as I found out later oil based products tend to stick together better than mixing them with latex. Next time I'll skip l 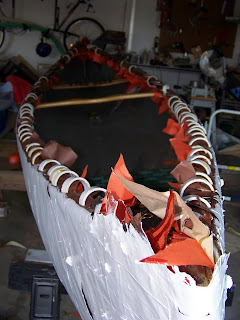 atex stuff altogether.
Once everything was dried I flipped the hull to start planning the gunnels. Here you can see all of the clamps used to keep the strips of paper secure while drying.
For the wooden parts I was going to use scrap wood and used 2 x 6 pressure treated pine decking. This old decking had been replaced by composite decking to match a new deck extension, but was less than 10 years old and was still very solid. What else was I going to do with roughly twenty 18 foot long deck boards? I was pretty certain that out of all that material I could find at least four pretty solid gunnels.
Pressure Treated Pine??!!? Yes, I should probably apologize to all the serious boat builders out there, but remember I was trying to only use materials I already had on hand, or stuff that was going to be thrown away. I wasn't about to spend money on proper boat building wood. And besides, I reasoned the paper was likely to give out long before the pine would.
I used a guide attached to my circular saw to rip the 2x6 into three quarter inch widths. This gave me outwhales which are 3/4" by 1 and 1/2" . I attached them by glueing them on with Titebond III (had it already, of course) and screwing through the inwhales and hull of the mold boat into the new outwhales to hold them in place while the glue dried. Remember the PVC clamps and binder clips weren't wide enough!
Meanwhile, I also steam bent quarter inch thick sections of the pine over the stems and lashed them in place with as many straps as I could find. I eventually glued two such strips onto each end, giving the boat 1/2" outer stems. Later, I would use some of the same steam bent material to create 1/2" inner stems which would be glued to the paper skin and screwed onto the outer stems. Looking back, steam bending probably wasn't necessary. When I later bent some ribs into place I merely soaked them in water for an hour, and they took the shape of the hull fairly easily.
I also doubled up the quarter inch strips of pine to lay a 1/2 inch keel down the center. It was glued to the paper and stems (wood butchery evidenced through a very poorly planned scarf joint with the stems) Later I would do the same to the interior, laying in a 1/2" keelson glued to the paper and screwed into the keel. 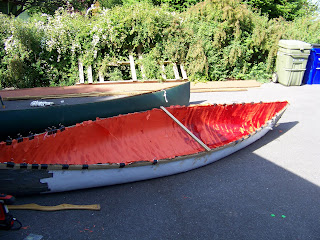 Here the hull is just removed from the 'mold', my poor Mad River that had been encased in this paper cocoon for over a year.
LESSON LEARNED: Just go ahead and slice the stems, or someplace, to get the hull off. Mine ended up tearing near the stern and all the duct tape in the world couldn't make it right again.
In this picture I've placed a temporary thwart to help keep the shape, and I've had to re-glue the gunnels to the hull where they ripped off due to the tearing. At least you get to see the binder clips in action.
Posted by mark at 8:17 PM