Rock beats Paper. . .at least in this case.

After a little over ten hours of use on calm, flat water, it was time to put the Paper Canoe to a little stress testing.  Less than an hour upstream from Washington D.C. there is a nice section of moving water on the Potomac near Seneca, MD.  We'd test it here.

We put in at Violets Lock, went upstream just bit, and then turned southward to move from the Maryland side of the Potomac towards Virginia, and Donald Trump's newly acquired golf course (incidentally, while renovating the course he very courteously had over a mile of riparian buffer ripped out so his clientele could get a view of the river while sitting in the clubhouse. 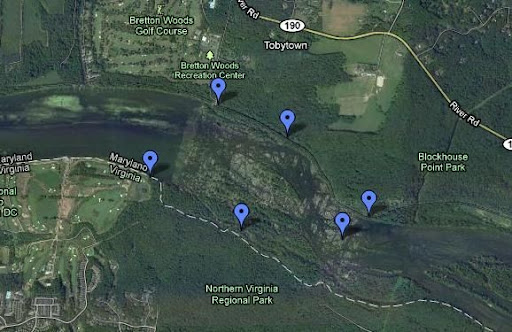 We pulled up on the Virginia shore to stretch our legs and get ready for the faster moving water and the many small, twisty channels on this side of the river.  And by 'getting ready' I mean we took the opportunity to lighten our coolers a bit.

Not far down the channels and the canoe was doing splendidly.  We rafted up next to an enormous downed tree, lodged in the center of the channel for many years and tried to ignore the beckoning call of the rope swing dangling from an extremely slanted sycamore on the bank.  Many times in the past I'd succumbed to its siren song, but this was early November with water just a bit too chilly, so we simply sat, chatted, and lightened the coolers some more.  Looking upstream you can just make out one of the drops the canoe went over nicely. . . 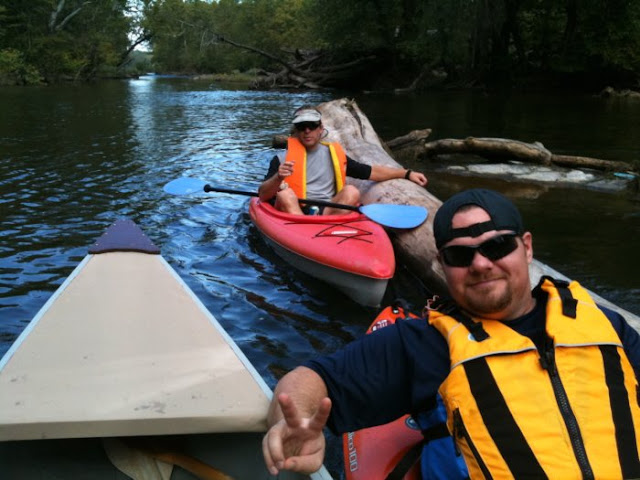 Unfortunately the smooth ride was not to last.  As we continued down stream the turns got tighter, the twists went faster, and the rocks loomed.  Many turns were made with a well timed paddle stroke, but sadly, many more were made by the force of the water pushing the canoe broadside against a massive rock.  Although I couldn't see any leaks, I could tell the canoe would not end up as pretty as she started (and that wasn't a high mark to begin with!)

We made our way out to the main channel and chose to stop on the exposed rocks below a section known as the Seneca Breaks.  This is just an incredible section with wide, scenic views, cool breezes, and again ample opportunity for cooler lightening.  You can see the canoe is a bit banged up. 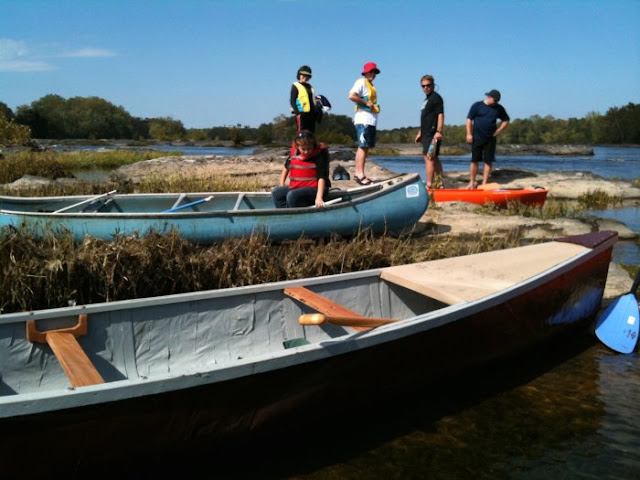 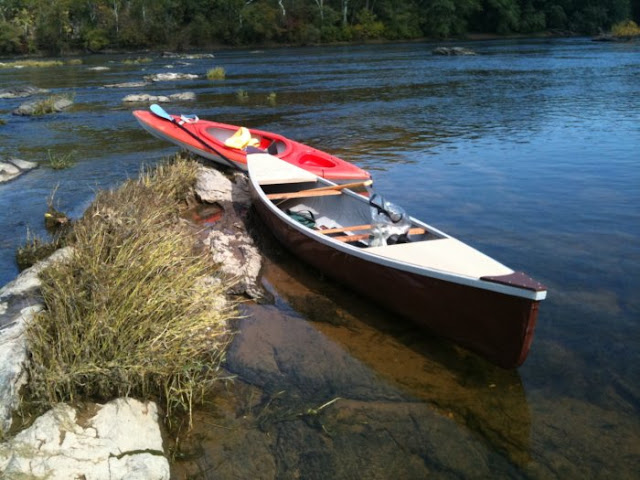 Still no leaks!  So we take the opportunity to play a bit in the rapids and moving water.  You can see how the scrapey shell and rock bottom could be unforgiving for paint, varnish, and paper. . . 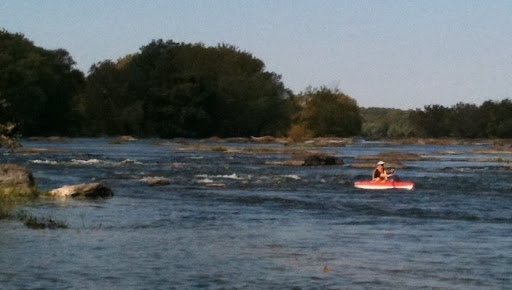 Eventually we knew we had to move on, so we made our way back across the main channel of the Potomac to make the very short portage across the towpath in order to place the boats in this watered section of the C&O canal.  Here the relatively calm, flat water gives us an ideal route to paddle easily back towards our vehicles.  It is also a great section for spotting wildlife.  We saw numerous turtles sunning themselves on logs, a few kingfishers darting from tree to tree, and even got the chance to get close enough to this great blue heron with enough time to take out my phone, figure out how to take a picture with it, and watch him fish for many minutes. 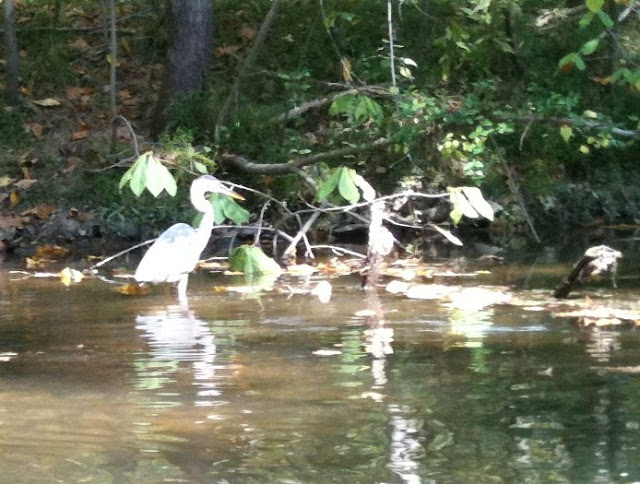 Back at Violets Lock the take out would reveal the grim news... the Paper Canoe suffered major deformations on both sides. 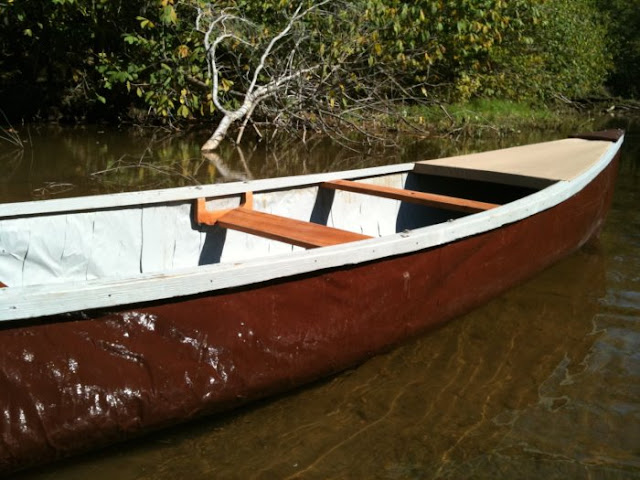 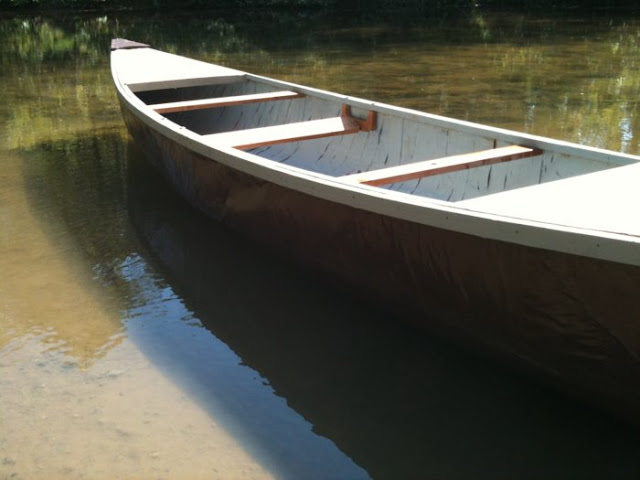 But still NO LEAKS!  It was a fantastic trip, fair weather, good water, and great times.  And we answered the question of wether or not the Paper Canoe could do a Class II. . .YES! (sort of.)  I'm certain a more skilled paddler would not have made her work as hard against the many rocks, and she wouldn't have needed to endure the many scrapes, but all in all I'm amazed at how well she endured, and I didn't have to swim or wade back to my car.

With over 13.5 hours on the water, much of it inhospitable for her, she's done quite well, even if she won't win any beauty contests. 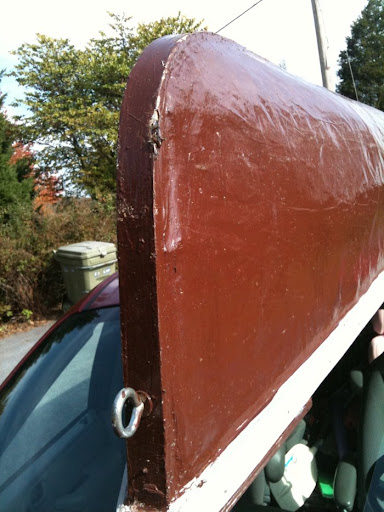